See a MN Wild Game During Our Annual Gala 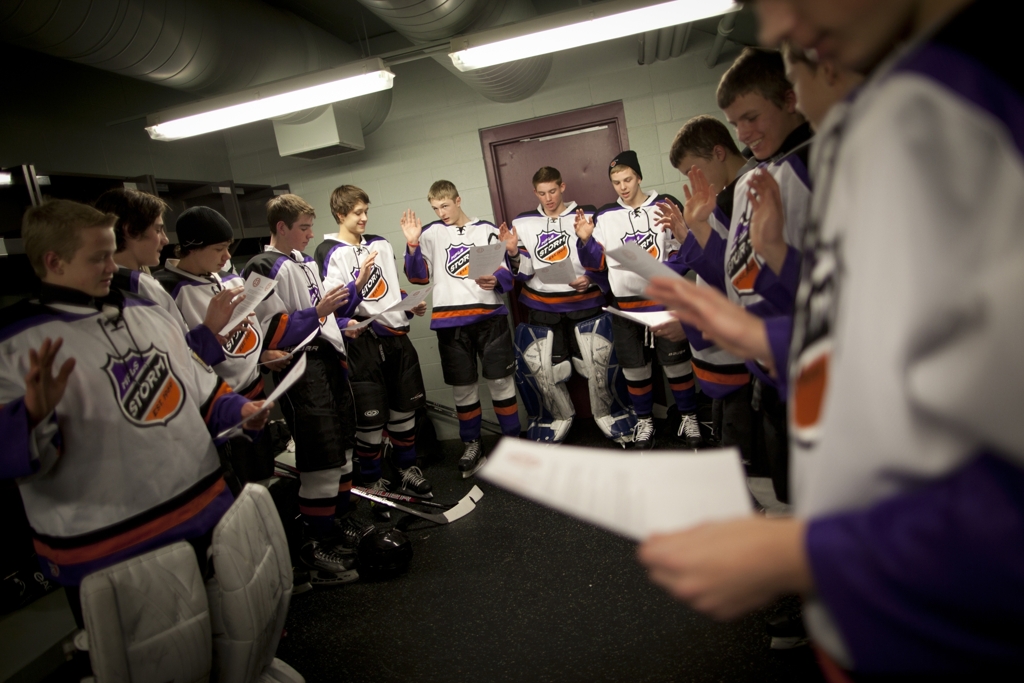 Minneapolis Storm Bantam A youth hockey players recited "Jack's Pledge" to be extra safe on the ice before a game against Osseo/ Maple Grove at the Parade Ice Garden in Minneapolis.

In a fresh push to rid youth hockey of illegal hitting, some of the sport's leaders in Minnesota want players to sign a pledge to skate more safely and coaches to voluntarily sit players who commit violent infractions.

The call comes as two teenage Minnesota hockey players lie in hospital beds, paralyzed after being hurt on the ice.

Minneapolis' youth hockey association, known as the Minneapolis Storm, launched a website Wednesday night encouraging players across the state and country -- from 4-year-old mighty mites to high school stars and maybe even college and NHL players -- to sign "Jack's Pledge," a commitment to playing safe in tribute to 16-year-old Jack Jablonski, who was paralyzed Dec. 30 after being checked from behind.

On the site, www.jackspledge. com, players are asked to sign documents promising: "I play the body to play the puck. I do not hit to hurt. I do not board. I do not cross-check. I do not check from behind. Ever."

Coaches are encouraged take a similar pledge to teach safe play, including keeping players who have committed violent infractions off the ice beyond the time they are required to sit in the penalty box.

In the meantime, the Jablonskis, along with Minnesota hockey legend Lou Nanne and others, were planning a press conference for Thursday, hoping to spur a new drive toward safety and urgency in enforcing USA Hockey rules more aggressively. USA Hockey is the governing organization for youth and adult hockey across the country, not including many high schools.

USA Hockey and its state affiliate, Minnesota Hockey, recommended in an open letter on Sunday that coaches, officials and players take measures such as reminding each other of the dangers of checking from behind before games and practices and reviewing correct body contact and checking techniques.

Though Jack's Pledge is a grassroots effort without enforcement measures, leaders said they hope it will spark a change in hockey culture across the country, especially among the more than 60,000 youth, high school and adult league players in Minnesota. The association will provide helmet stickers reading "Jack Jablonski -- In Our Hearts," for players whose high school coaches or youth association leaders register with the website.

The Jablonski family is supportive of the effort and is "driving a mission to change the way that hockey is played by eliminating the violence, especially in the youth game," association President Paul Larson said.

In addition to the pledges, the association is suggesting hockey coaches honor a new informal "Rule 13" by giving extra bench time to their own players who are called for dangerous penalties including late hits, checking from behind, boarding, cross-checking into boards and head contact.

Under the suggested rule, checking-from-behind penalties would be reported and tracked by associations and consequences imposed by the associations would increase dramatically for repeat offenders: A second penalty would bar the player from the following game and practices leading up to it; a third penalty would mean missing practices and the next three games; a fourth penalty would mean dismissal for the season and require executive-committee approval to play again.

"We've noticed an increase of injuries particularly at the youth level as a result of more emphasis on a physical style of play. The physical style of play kind of derives from, really, coaches desiring to win as opposed to teaching skills that may take longer to adapt," Larson said. "Really, the strict interpretations of the rules have been diluted a little bit ... we'd like to correct that."

Mike Jablonski, Jack's father, said his family supports the pledge. "We want the finesse back in the game," he said.

Jablonski, who played for Benilde-St. Margaret's, was still in serious but stable condition on Wednesday. Doctors have said Jablonski dislocated his spine and suffered several fractures and significant ligament disruptions, making it very unlikely that he'd have the use of his hands and will be unable to walk or use his legs. He has since moved both arms beyond a range thought possible.

In the same hospital, Privette, of St. Croix Lutheran High School in West St. Paul, still had no feeling in her legs but continued to be able to move her tingling arms, according to her mother, Penny Privette.

Penny Privette said her daughter suffered a similar spine injury in 2008 and it took several months for her to recover, with feeling coming back in stages. She said doctors have likened the injury to a concussion of the spine and are hoping that, over time, movement and feeling will come back again.

"That's where our prayers have been and that's where our steadfast prayers are going to remain," she said. She said the family has been somewhat private about her daughter's injury in order to limit visitors and attention so her daughter can focus on recovering.